Wednesday’s Concert has a new format 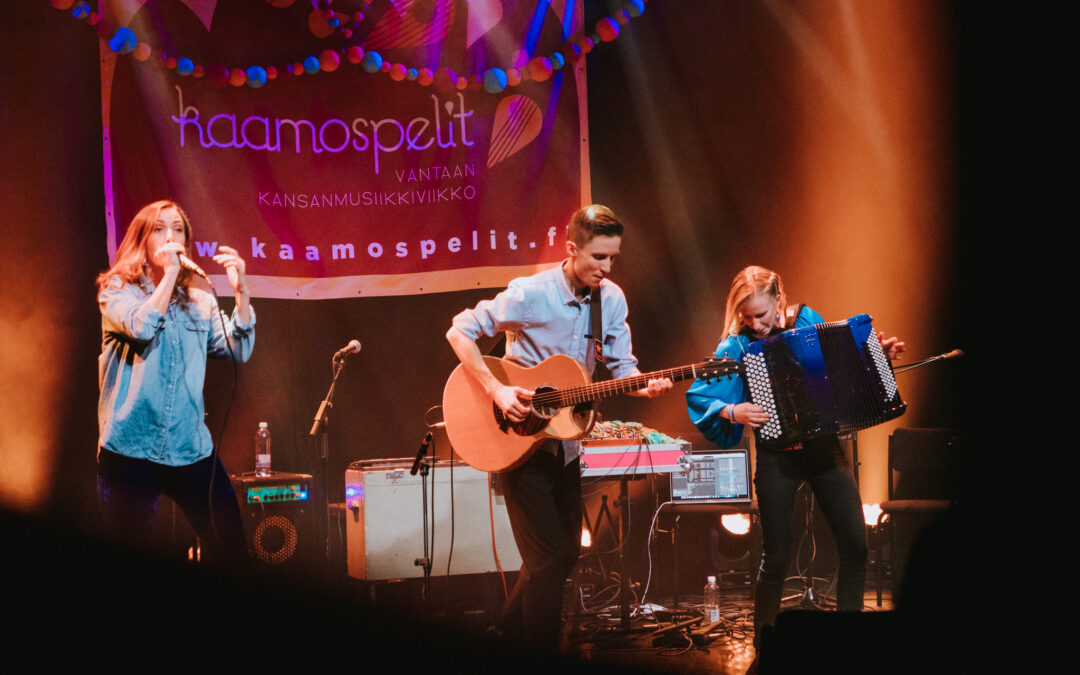 Due to illnes, a live performance of Vildá planned for Wednesday evening has been canceled. But fear not: Vildá has not left the building. The one-hour-long concert will kick-off with a speical 15-minute-long recorded performance of the group that earned it the European Culture prize in January.
After Vildá comes a live-streamed performance with the exciting Piirainen Blom Company. The trio features guitarist JP Piirainen, beatboxer and singer Venla Ilona Blom and accordionist Viivi Maria Saarenkylä, who is also a member of Vildá.

The concert will allow viewers a chance to enjoy the band’s most recent success.
”The recording was made for the Music Moves Europe Talent Awards competition 2021. It took place January 15 and Vildá was one of the winners,” says the group’s proud manager Laura Salokoski.
Vílda’s sound is a unique combination of mystical yoiking, swinging rythyms and improvisation. The duo finds Hildá Länsmans yoik in dialogue with Ms. Saarenkyläs expressive accordion, which quickly sends spirits northbound. Skorpioni, a noted collaborator with Music Finland, produced the video.

The Piirinen Blom Company Radiates
The rest of the concert comes to us live from Central Ostrobothnia Conservatory, where JP Piirainen Blom Company will take the stage.
”Our passion and desire is to take Finnish folkdance music into the 2020s,” says Mr. Piirainen.
”The energy in this music is important for us all. None of us play a traditional folk music instrument, but in our music we embark on a journey of discovery where we explore how we can express folk music a new way,” he continues.
This summer Mr. Piirainen and Blom – then a duo – released their debut album Matka, but the pandemic prevented live performances of its tracks. The invitation to perform at Winter Accordion 2021 couldn’t have come at a better time. In the meantime, the duo took on Viivi Maria Saarenkylä and became a trio.
”Our music is largely built around stories. We often tell stories before we perform that take the audience on a journey. We hope that they’ll enjoy going on these journeys with us,” Mr. Piirainen says.
”We have some traditional songs. Everything we play has its roots in old dances that are a part of Finnish culture. Vals, mazurka, schottis. So in every piece there are some familiar elements,” Mr. Piirainen continues.
Even if the show will go on without a live audience, the trio is still excited about its Kokkola performance – and at least we can still enjoy it streamed live.    ”We are very happy that we can come to Kokkola for Kokkola Winter Accordion. Our music is easily enjoyed and it radiates positive energy in these times!” he says.