Music will fill the cow-house on Tuesday 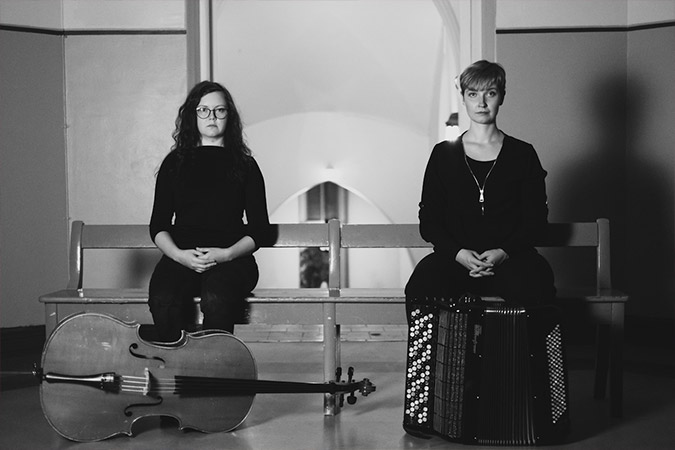 An atmospheric evening at Jukkolanmäki
Kokkola Winter Accordion is the premier winter festival of Kokkola, offering a wide range of popular music events throughout the city. This year’s festival takes place under pandemic restrictions, with hopes for better times ahead – but the goal is to keep the party going. The show will therefore go on this year in Jukkolan Navetanvintti in Lohtaja exactly as planned, but without live audiences or refreshments.
The concert will be streamed for public viewing free of admission on Tuesday at 7 p.m. at  https://www.keskipohjanmaa.fi
The performance will feature two young duos – Sonja Vertainen and Iiris Ranniko, and Julia Hansson and Katri Antikainen – and their interpretations of classical favorites from the centuries, with Ms. Vertainen and Ms. Ranniko on accordion and viola, and Ms. Hansson and Ms. Antikainen on accordion and cello. Expect the legendary works of Bach, De Falla, Rachmaninov, Couperin and Greig.
”In early fall we had school as usual, but when the pandemic worsened we continued our studies virtually from the chamber orchestra site via Zoom. Even though it went well, it wasn’t the same as classroom learning. Nuances are lost when you hear an instrument through a computer, even if you have a good microphone,” says Sonja Vertainen of these unusual times. Ms. Vertainen misses live performing, something she last did in November with Guardia Nueva.

Mines are important
The performance will find the duo performing mostly from the works of Bach.
”The whole program is totally new for us, so we’ve rehearsed every work especially for this performance, with a special focus on Bach. The material is pretty demanding but Iiris and I are enthusiastic,” says Ms. Virtainen.
The duo will perform without face masks, but will practice social distancing.
”Playing is pretty physical so it can feel pretty laborious to perform with a mask. It’s also important in a duo to see your partner’s facial expressions” she says.

Rythmic Rocket
The other duo consists of Ms. Hansson and Ms. Antikainen, who will perform accordion and cello works.
”It’s great to have this concert. There hasn’t been much going on lately. Preparing has required the same demands as for a typical performance. However, you have to approach a concert without a live audience in a different way. Interaction between performers and the public is important and gives the perfomance a special energy. But we can’t think too much about these things at the moment,” says Ms. Hansson.
However, she expects pre-concert nerves to be the same as for a normal concert.
”It’s really nice just to get lost in the playing. It’s been a while since I’ve been able to do that!” she says.
Ms. Hansson says she tries to look on the bright side, even in unusual times.
”It’s great to present a high classical concert. It’s a valuable experience and you can also put it on your CV,” she says.
She is especially excited to perform ”Die Virtuose Tafelmusik Von Don Juanquijote,” a piece for accordion and cello by Aulis Sallinen.
”This is a rarely perfomed piece. It is interesting, like a rhythmic rocket filled with different emotions. The other works in the concert are calmer,” she says.
Ms. Hansson will return to her hometown of Kokkola the weekend the festival begins. She’s keeping her thumbs up that the concert week unfolds as planned.
”I’ll record the Swedish-speaking school performances in advance,” she says.