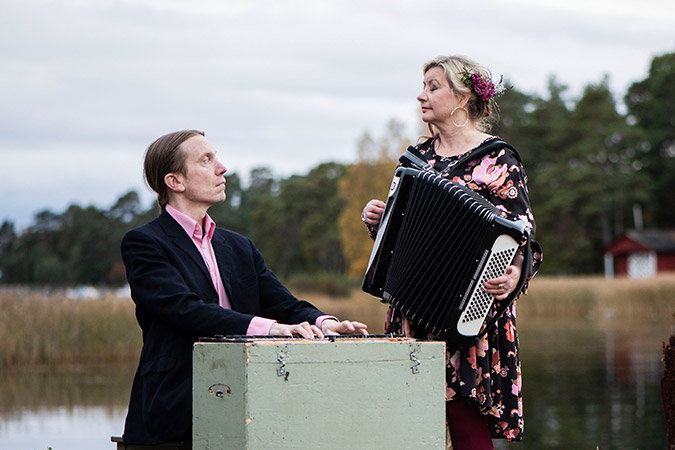 Kokkola Winter Accordion almost always features events in Pietarsaari — and this year is no exception. On Friday, February 12 at 7 p.m. Maria Kalaniemi and the harmonium virtuoso Eero Grundström will play an empty Schuman Hall. The concert will be live-streamed and can be enjoyed for free by all at: https://www.keskipohjanmaa.fi

Last April, the duo released its album Mielo to a warm reception. By summer, it had reached the top of the world music charts in Europe and more recently was nominated for an Emma award for ethnic album of the year.
“I am so far along in my music career that I’m not anxious about it. It’s fun just to let things go forward on their own. And it has been exciting how, despite the pandemic, the album has taken off and found an audience in Europe,” says Ms. Kalaniemi, who was able to perform the music on Mielo before distance work and live streaming became the new normal.

Menuett from Jeppo
The concert will mostly feature music from the album Mielo, but the duo will tap into other musical sources as well.
“It’s Mielo with all the bells and whistles. Eero and I have included a little bit of everything. There is, for example, music from Jeppo, which means a lot to me. Jeppo rural fiddle traditions in folk music have featured heavily in my teaching at the Sibelius Academy. In addition, there will be tango, which as Finns is our musical heritage. And then I also sing in Swedish,” says. Ms. Kalaniemi.
She is thankful for her bilingual Finnish-Swedish roots.
“My mother is from Fiskars and my father, from Juva. It was always interesting, growing up in Swedo-Finn-Savolax, when the two cultures would collide,” she says.
Given the global pandemic, Ms. Kalaniemi is pleased that she’s an artist who can also lean on a teaching career.
“Many freelancers are in a difficult spot because of the virus, and of course this is very complicated,” she says. “Fortunately I have my experience as a lecturer in folk music at the Sibelius Academy to fall back on. The teaching is very dear and important to me. It also provides me with a livelihood.”

Kokkola During The Time of Unrest